C Rate: First thing to know is C rates have basically become useless as the factories, in an attempt to outdo each other and gain market share, are just claiming higher C rates. There is also no official standard on how to calculate C rates, so assuming real C rates would be used a 30C pack from one company could be equivalent to 20 , 25 , 30 ,35 etc. from another company.  In the end it all depends on how the factories would come up with the C rates.  SMC uses the factories specified C rates (Factory Spec) and makes sure that the IR (Internal Resistance) of our packs is lower as you go up in C rate and mAh.  We’ve been offered some 80C packs from factories that have higher IR than our 70C packs.  If we would offer such a model we wouldn’t claim 80C or 70C, we would claim it to be lower. Even if we use the factory specs for C rate we also adjust the C rates based on IR, which is the ability of the pack to drop more or less voltage under load.  Maybe someday there will be a standard C rate testing method and certification but I highly doubt this will ever happen. As leader in the high end RC battery market, we're working on a new rating system that we feel would make more sense and offer the true performance of the pack.

Choosing a pack: Now that you know more about C rates here is what you need to consider before purchasing a pack.

If running heavier vehicles with modified motors like a Traxxas E-Revo using a higher C rate pack like our 6500-70C is recommended.

The number one cause of LiPo failure is discharging it down too low.  You must set the LVC (low voltage cutoff) in your ESC at a minimum of 3.4v per cell.  Setting it higher will be better (we use 3.5v per cell in our own cars).  Just because you have it set at a certain voltage per cell it doesn’t mean it’s actually stopping at the proper voltage.  This can easily be tested by measuring the voltage of your pack as soon as the LVC kicks in.  If you have it set at 3.4v per cell and your pack voltage for a 2S is under 6.8v it means it’s not cutting off at the proper voltage.  Example if you have it set at 3.4v and a 2S pack is at 6.6v then you should increase it to 3.5v per cell and test it again.  By not discharging your packs too low under load you will increase cycle life.

When running 2S or 3S packs in series, it’s best to set the LVC higher and adjust accordingly.  The reasoning behind this is that just because 2 packs are rated at 5000mAh it doesn’t mean they both have the exact same mAh.  The cells within a pack are matched for the pack but 2 packs might not have the same mAh.  By setting the LVC a bit higher you can check the voltages of each pack and cells after a run and make sure they are very similar and not below the desired cutoff.  The LVC when set per cell actually uses the pack voltage to kick in the cutoff.  With two packs of 2S in series, if one would have lower mAh and you set the cutoff at 3.4v per cell the LVC should kick in when it the voltage reaches 13.6v for the entire pack.  This means one pack could be at 7.2v and the other at 6.4v which means the lower mAh pack is getting over discharged and risks being damaged. For optimum results it's best to measure the voltage once the LVC kicks in and adjust it as needed.

Many racers prefer the 4mm inboard style packs, however this design offers the same performance as a wired pack with a genuine connector.

For 4mm inboard style packs, make sure to always keep the female connector in the pack clean and your male connector clean with a nice snug fit.  If the connection is loose this will create extra resistance which reduces performance and may result in the 4mm female tube melting the case.  We don't recommend inboad 4mm packs in 4wd Short Course trucks.  These heavy trucks use powerful motors and are very heavy and demanding on packs so this can result in a melted case around the 4mm female connector.

For wired packs with genuine connectors like we offer, you must also keep the contact area clean on both the female and male connector. Make sure the connectors have a good snug fit to keep resistance as low as possible.

LiPo expansion versus swelling: When dealing with hard case packs we are limited by the size specified by RC's governing bodies. The cases are made to be at the maximum size so we can use the biggest possible cells. The IR and mAh work against each other, similar to torque and rpm. The only way to increase mAh and keep the IR low is to increase the cell size.  In the past few years the factories have been designing cells that use up the entire case with no clearance as this allows the cells to have maximum mAh and lowest possible IR.  The downside to this is all Lithium cells expand under use. This means a high mAh pack with low IR like our 7200-70C pack has no clearance inside the case to allow for normal expansion so the case will distort some and get slightly rounded.  For us swelling/puffing is when the cells get pretty big and crack open the case. The causes of swelling are over discharge, over charge or a cell failure.  Cells/packs will also swell when they have reached the end of their useful cycle life.  Very rarely is it due to a cell failure and when it’s due to a cell failure only one cell in the pack will swell.  If all cells in a pack have swelled then it was due to user misuse or abuse or end of it's cycle life.

Here are two pictures showing swelling. The first picture is one cell failing which is considered a manufacturing defect.  The second picture is all 4 cells swelling which is caused by user misuse or abuse. 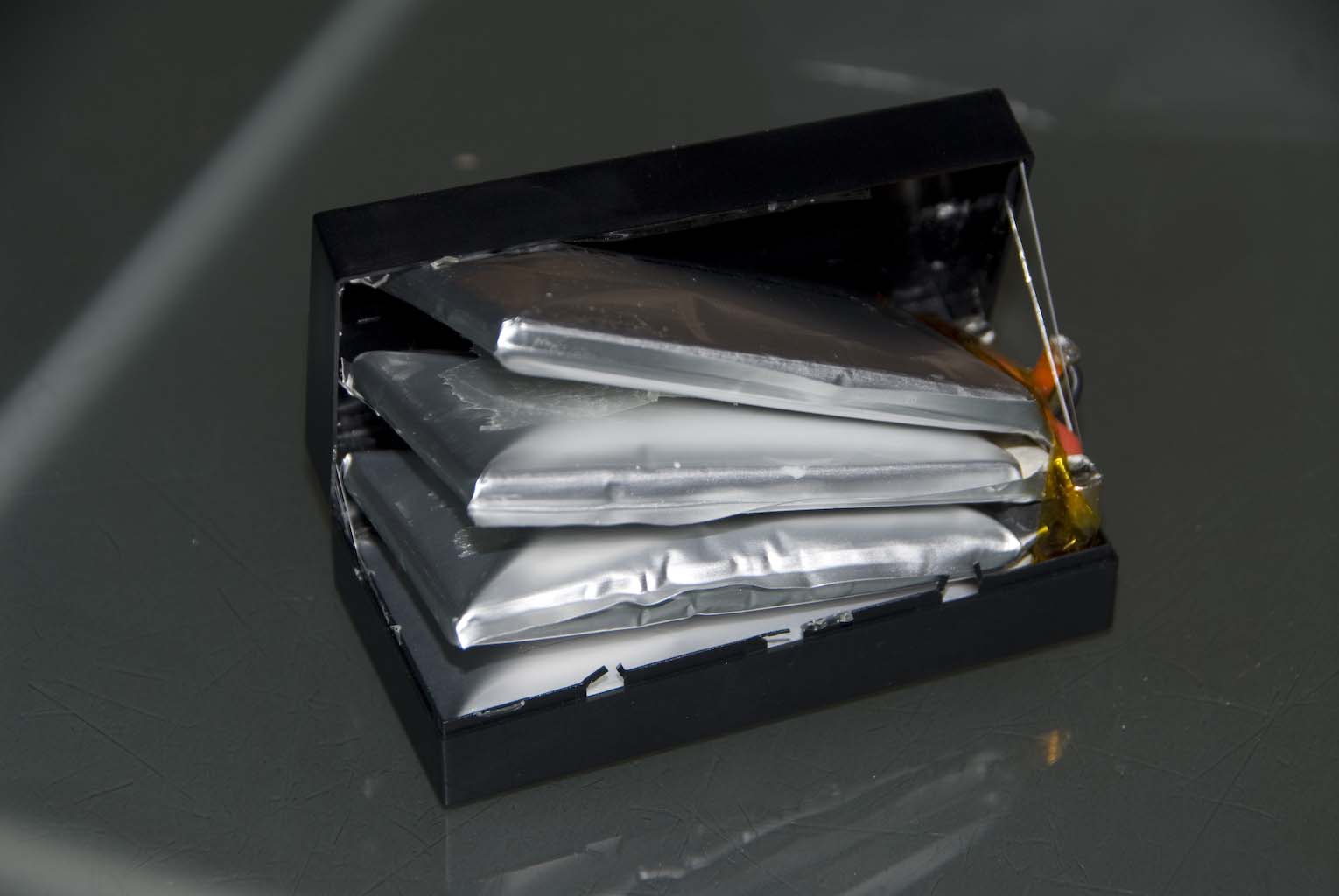