SMC has always been known to sell packs that are powerful and this is due to the internal resistance (IR) of the cells being lower.  The lower the IR of the cells/pack the less the voltage will drop under load.  So this means with a lower IR pack you need to use a higher voltage cut off to prevent the pack from being discharged to low under load.   Discharging to low under load increases the chance of cell damage and will shorten the cycle life of the pack.  The temperature of the pack will also impact how much charge is left in the pack.  The higher the pack temperature the lower the IR.  So if it’s a hot day or if you are pulling higher amps out the pack this will lower the IR and discharge it more. Ideally you want to have around 20% of the packs mAh left once the cut off has kicked in and the cells have cooled down.  This will give you good results on cycle life.

To illustrate the above info I did some tests on 2 different 5200mAh-2S packs.  These come from two different factories so they use different materials.  Both of these factories claim the same C rate so this shows that using C rate to determine a cells/pack performance is not good.  This is one reason why I came up with the True Spec Amp rating for our packs.  Both packs were charged to the same amount of charge which is 46%.  Both packs we discharged at 15 amps which duplicates your typical amp draw when running full throttle in a normal 1/10th vehicle.   I used an external voltage alarm set at 3.70V cut off on both packs.  I did the pack with higher IR cells a second time but this time I set the external voltage alarm at 3.60V as the 3.70V test left to much mAh into the pack. If pulling higher amps under full throttle you may need to set your cut off lower as this will create more voltage drop depending on the packs IR.  As you can see there are many factors that will determine the proper cut off.  Below are the pictures with descriptions.

Hope this info is helpful and if anyone has any questions feel free to email me at the email address listed on the SMC site.

Lower IR pack showing 26% of charge left after the external voltage alarm reached 3.69V and the 15 amp load was turned off. 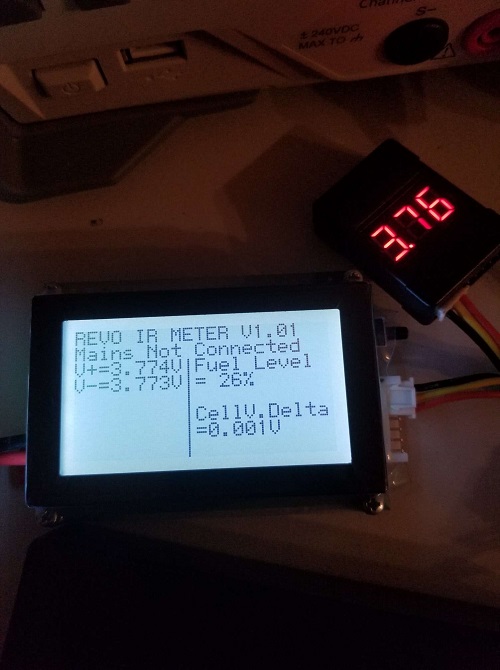 Lower IR pack mAh taken out of it and time it took before the alarm reached 3.69V.

Higher IR pack showing 40% charge left after the external voltage alarm reached 3.69V and the 15 amp load was turned off.

Higher IR pack mAh taken out of it and time it took before the alarm reached 3.69V. 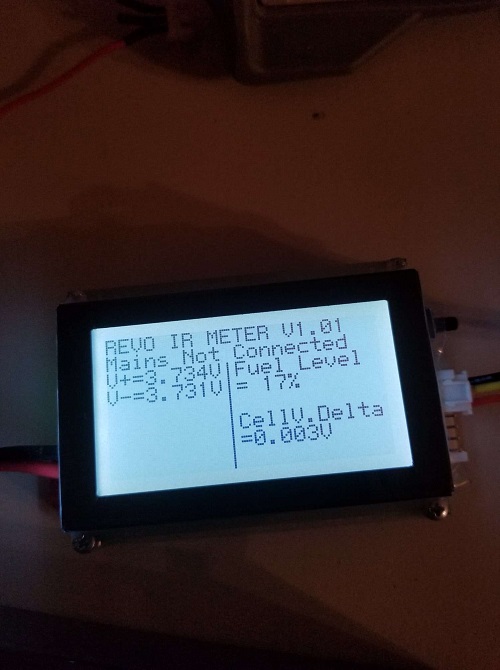 IR pack with mAh taken out of it and time it took before the alarm reached 3.59V.

The product is currently Out-of-Stock. Enter your email address below and we will notify you as soon as the product is available.